To understand Mayor Nolan Crouse's determination to establish St. Albert as a leader in workplace safety and injury reduction, you have to first look at his resume, which documents the time he spent in the forest products industry.

"I worked in that industry for 30 years," says Crouse, who's now serving his third term as mayor.

"It can be dangerous. I realized very early on that the corporate safety culture is set from the top down, and that how you are as a leader sends a strong message about the importance of human life—and human limb—within your organization. 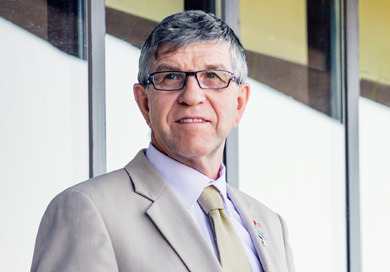 "When leaders abdicate that responsibility, it will show up in a lot of different ways, but it will absolutely show up in the number of people who get injured at work."

When statistics indicated an increase in the number of emergency responders suffering back injuries because of awkward patient lifts, Crouse and his council colleagues took action.

Using money the city received through the PIR program, a bariatric lift was purchased for EMS and firefighting personnel, a move that translated into a reduction in the number of workers' compensation claims.

The city's focus on the safety of its nearly 800 employees has not gone unnoticed.

Making a difference to front-line staff

"Really, it's great that our mayor and council has the foresight to use the (PIR rebate) for the people who are actually doing the job—and can benefit from it," says firefighter Troy Fisher, noting that heavy-lift assists are among the most common calls the department receives. "It's making a big difference for the people on the front lines."